IPL season is upon us and the madness is in full flow. Along with the IPL comes the inevitable discussions on
which team is better, who is more consistent, etc. Here at Incentius we want to take an analytical stab at this
question. How can we compare teams across the matches that they’ve played. Note that we want to look at overall
consistency and not just winning performance. If a team loses a close match it should be still rated higher than a
team that lost a match by a big difference. Similarly winning teams should get more credit if they had a big
victory as opposed to those who won close victories.

The core question here is one of normalizing scores in a game. We’ll do it on a scale of 0-1. For example if team
A defeats team B in a match, team A would get a ‘performance metric’ of say 0.60 and team B would receive a
performance metric of 0.4 (Hence adding up to 1). The greater the extent of the victory the higher team A’s metric
would be and the lower team B’s metric would be. The normalizing to 1.0 ensures that every game is equally
weighted. This is the approach we choose to take. If we wanted to weight each game differentially, say by how long
back that game was, we could do that as well. Or we could weight each game by the total performance of both teams.
That would give high scoring matches a higher weightage than low scoring matches.

So what strategy should we use for such measurement? Let’s use Duckworth-Lewis method in a reverse fashion. The
Duckworth-Lewis method is a statistical method that estimates the number of runs an average cricket team is
expected to make based on the number of resources they have at hand. In cricket’s case the ‘resources’ are number
of overs to be bowled and number of wickets in hand. Essentially Duckworth-Lewis is a matrix that contains number
of wickets in hand on one axis and number of overs left to be bowled in the other axis. The matrix values of
intersecting points tell you how many runs the team is expected to make. Read more about the Duckworth-Lewis
method and its application at it’s wikipedia
page

The Duckworth-Lewis method is primarily used for 50 overs matches. However, luckily for us Rianka Bhattacharya,
Paramjit S. Gill and Tim B. Swartz have calculated the T20 table for the same in their paper available here. Here is their table:

Now, how do we use the Duckworth-Lewis table to calculate performance for a match. What, we’re going to do is
calculate an ‘effective score’ for each team. i.e. if a team finished their innings without using up all of their
wickets and all of their overs, we’re going to argue that they could have used those remaining overs & wickets
to score extra runs. The number of extra runs they could have made is defined by the D/L table.

Hence, if in an innings a team is all out or finished all 20 overs:

If however a team has still wickets in hand and overs left to play:

Once the effective_score of each team is calculated, we calculate the performance metric by using:

Now that we’ve calculated the performance metric of every team for every match, let’s ask the data questions. 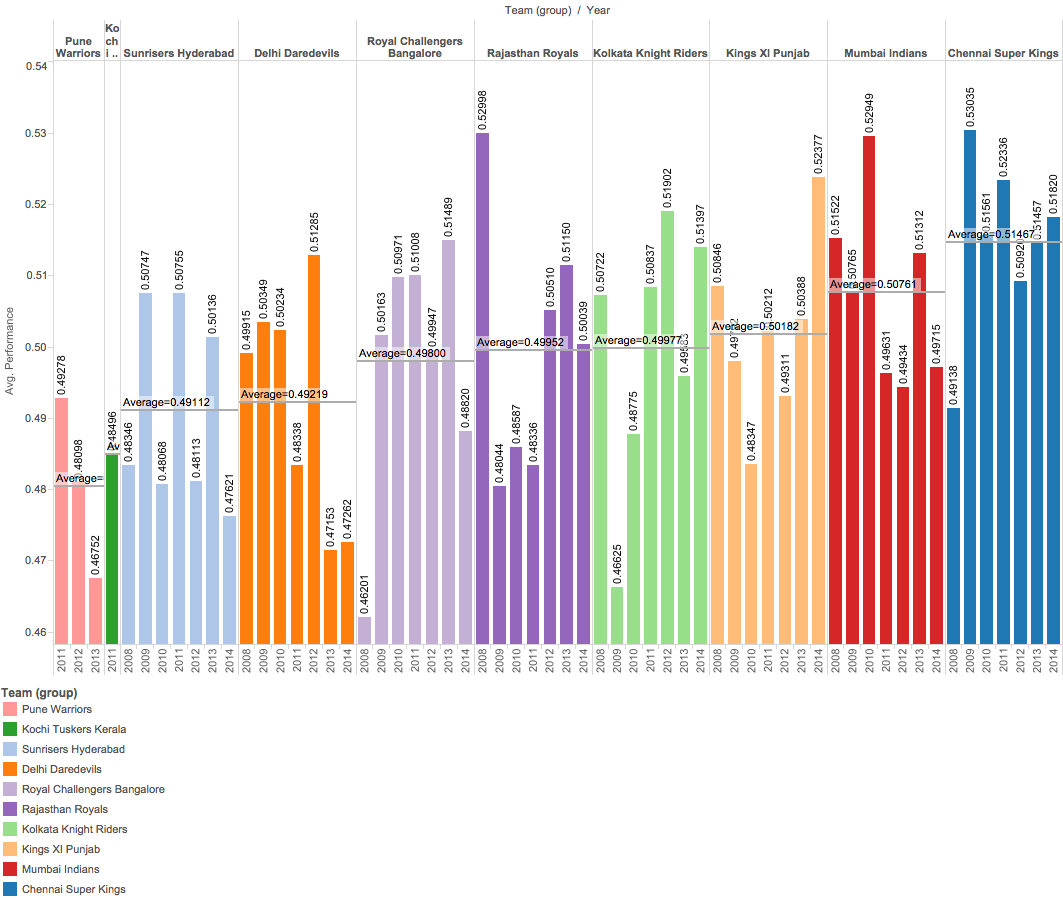 Chennai is the highest, no surprises there. Mumbai comes in second. KKR despite their two wins are 5th, explained
by their dismal performance in 2009. Kings XI have’nt won a single IPL but come in third.

* Note that Sunrisers Hyderabad and Deccan Chargers have been merged together.

Which match had the greatest win in IPL history in terms of relative effective score? Funnily it seems the first
ever match of the IPL was the biggest victory. Remember Brendan
McCullum murdering the RCB attack

Then comes the
second match of IPL 2009:

How do teams usually perform when pitted against each other. 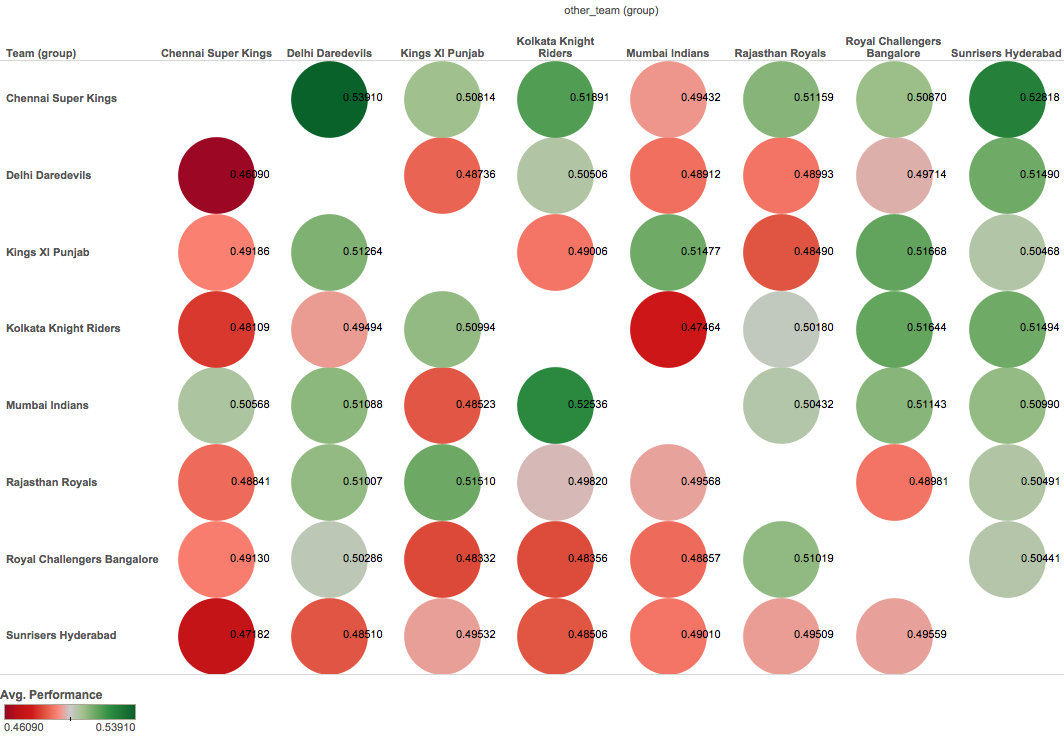 Hope you had as much fun reading this blog as we had writing it. Check out some of our other blogs at http://www.incentius.com/blog

Drop us a mail at info@incentius.com to get in touch. Also don’t
forget to subscribe to this blog on the right to get future blog posts like this one.